Uganda has been extremely important to our ministry.  It was one of the very first countries that we began communicating with and supporting financially. Along the way, we began paying the monthly mortgage for two churches/orphanages there.  One of these took it upon themselves to enter into a focused season of fasting and praying on behalf of our ministry. Six hours of worship and prayer crying out to God for us every day! This went on for over two months while we were still infantile as a ministry.

In response, we stepped in to meet some very significant financial needs on behalf of their Pastor Mubiru Hamza.  We affectionately refer to him as Epaphras because he reminds us of the powerful prayer warrior mentioned by Paul the Apostle in Col. 4:12-13.  Over the course of time we saw an opportunity to meet and to thank the prayer warriors in Nsangi, Uganda face to face.  Once we realized that we would be doing ministry in Kenya, we saw that we could go easily to Uganda to meet these angels on earth.  From there it became clear that our feet would first hit the ground in Africa while we were in Uganda.  So we determined to not just "visit" Uganda, but to literally LAUNCH our ministry from there.  It only made sense to us since that is where God had laid such a firm and beautiful foundation for us in prayer and fasting.

Not long after deciding to kick off our time in Africa with a ministry launch, it came to us from the throne room of God (via speaking to the fasting Pastor during times of worship and prayer) that God wanted RGWGM "to start a church".

This seemed ridiculous to us since we were being sent around the world and building a global ministry in the process.  But as we discussed the possible meanings of the mandate, we all agreed that maybe He was talking about a RE-start of the church in Nsangi, Uganda.  We waited for this idea to be confirmed in the spirit.  Once it was, we all embraced the idea and decided to have a "dual launch" while we were there.  We would be launching and celebrating the birth and official start of our global ministry AND we would be launching and celebrating the REBIRTH of what would have been a defeated and terminated church had we not come alongside of it months earlier.  Next thing we know, we were starting our first (of many to come) Red Gone White Churches.

From there we sent more money to prepare for the launch.  We bought all new choir outfits and a backdrop for the stage.  We bought a generator and more chairs and food, etc. We also brought in a local award-winning dance troop called "Joyful Generation".  We had no idea at the time we were booking them for this event that my contact with this dance team was literally the first orphan God brought to this particular church ten years earlier!!  God was all over this event.

Once we got there we, of course, met all of the leadership and thoroughly thanked them for blessing us so generously with their sacrifices of fasting and daily prayer for us.  We later realized that this church renaming would be much more involved than just putting up a new sign. Upon investigation, it was clear that there was no spiritual or organizational foundation in place in the form of a constitution.  So while we were in Ugnada, we literally wrote a church constitution from scratch and got it reviewed and approved by all of the existing leaders there.  Here is the result of that effort.

While in Uganda, we also took the time to visit one of our offsite churches in a village called Jinja, Uganda (about a 5-hour drive from our home base).  This is a very remote village with a great deal of poverty and witchcraft at its core, but God is shining a light there through our little church.  We have another church that time did not allow us to visit (on this trip).  It is in a seacoast village called Fort Portal, Uganda.  While in Uganda David preached six times in six days. 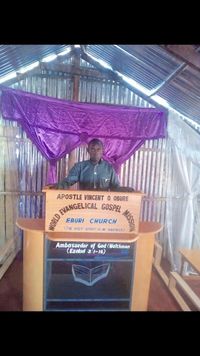